Ishikawa Prefecture is located on the Noto Peninsula, which juts out into the Sea of Japan. Kanazawa, the prefecture’s capital, is a city with a rich history and a wide range of tourist attractions.
We've put together a list of must-visit attractions in Kanazawa to help you make the most of your visit.
If you're planning a trip to Kanazawa, please take a look! 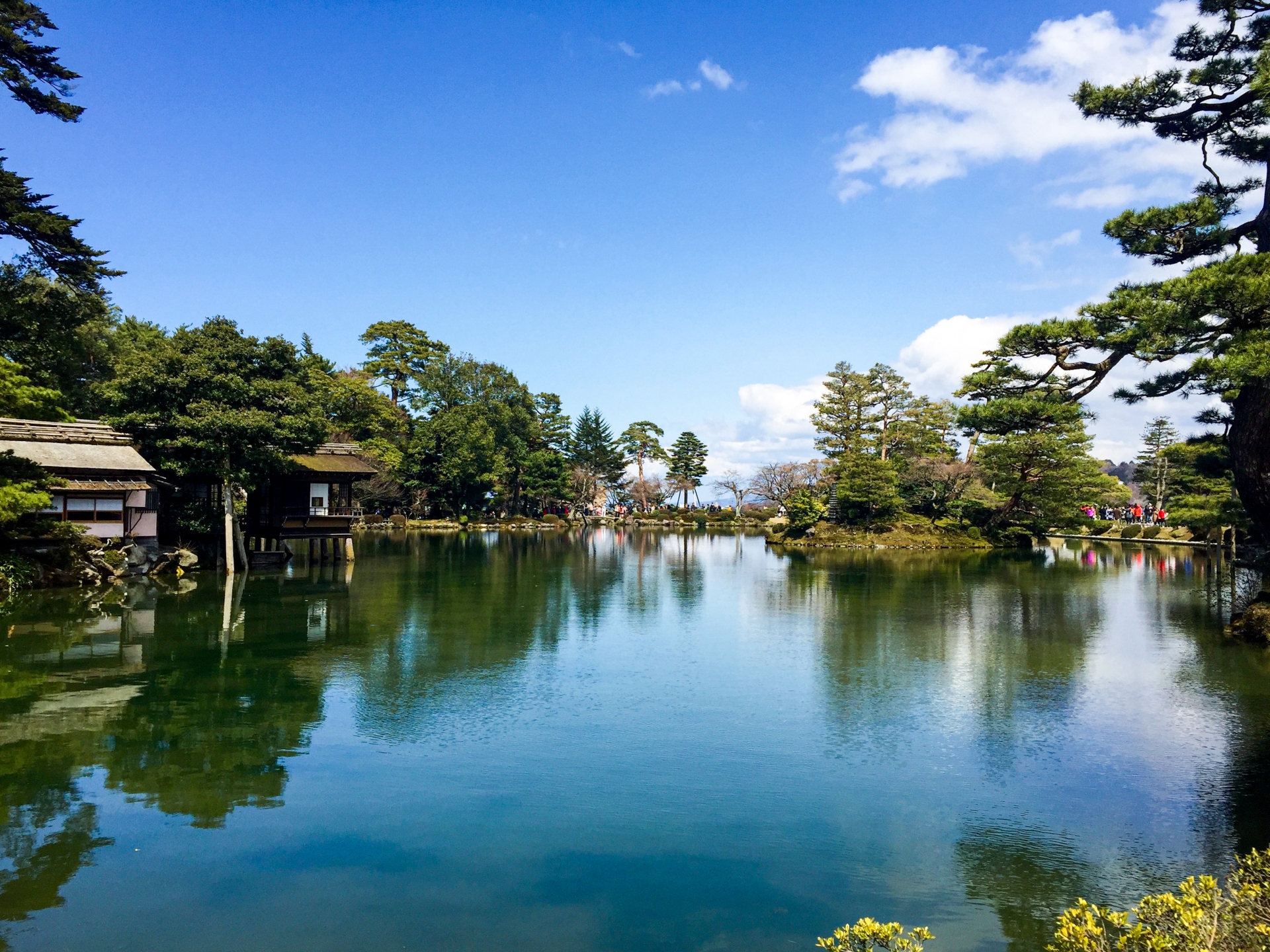 Here Are Spots You Absolutely Can’t Miss Out On!

After the opening of the Hokuriku Shinkansen in 2015, Kanazawa immediately became a popular tourist destination.

Kanazawa has a lot to offer, from its historic buildings and picturesque streets to its gourmet cuisine.

Kanazawa Station is the only station in Japan to have been voted “the most beautiful station in the world”.

Here are two points of the charm of Kanazawa Station. 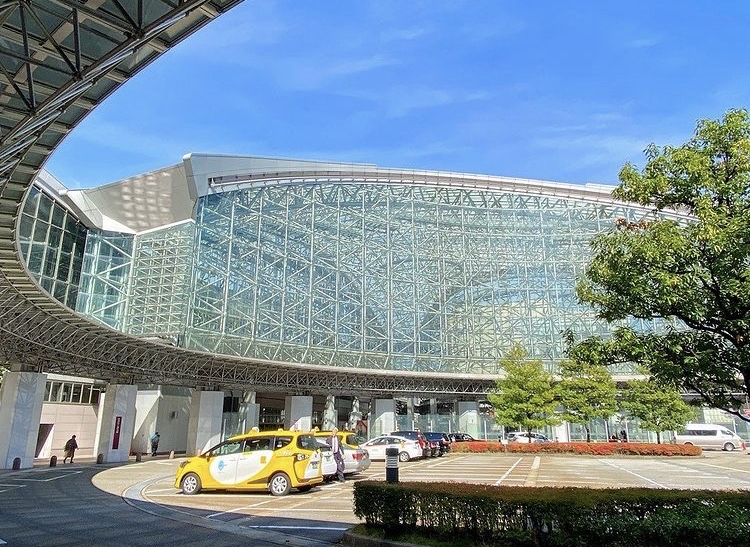 This building, which you will see as you head towards the Kenrokuen exit of Kanazawa Station, is called the Motenashi Dome.

But why was it named “Motenashi Dome”? The reason being is that it is based on the concept of “Omotenashi no Kokoro” (the spirit of hospitality).

In fact, Kanazawa is known as the area with the most rain and snow in Japan. As such, the Motenashi Dome was made to look like an umbrella to express “the spirit of hospitality found in offering an umbrella to those who get off the station”.

The dome is also unique in its appearance. It has a total of 3,019 glass panes, which create a spectacular view when you look up at the ceiling.

The dome is designed to let the light through so that even when it rains, visitors to Kanazawa can feel the hospitality of Kanazawa. 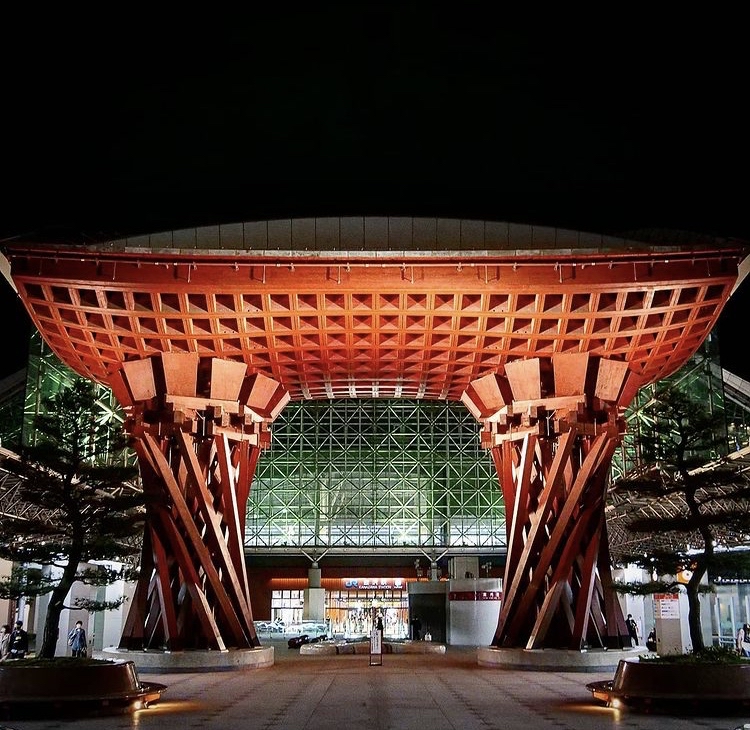 The gate that greets you as you exit the east exit of JR Kanazawa Station is called “Tsutsumimon” (The Drum Gate).

The gate was designed in the image of the Noh drum, Kanazawa’s traditional performance art. It is 13.7 metres high which gives it a majestic appearance.

The gate is not only beautiful from the outside, but also ingenious on the inside.

The two pillars that support the gate have water pipes running through them, so that rainwater that has fallen on the roof of the “Motenashi Dome” flows through these pillars and into the water reservoir.

From sunset to midnight, the dome is illuminated in the five colours of old Kaga province (indigo blue, maroon red, khaki green, ochre yellow and lilac purple), with a different colour for each day of the week, creating a magical atmosphere. 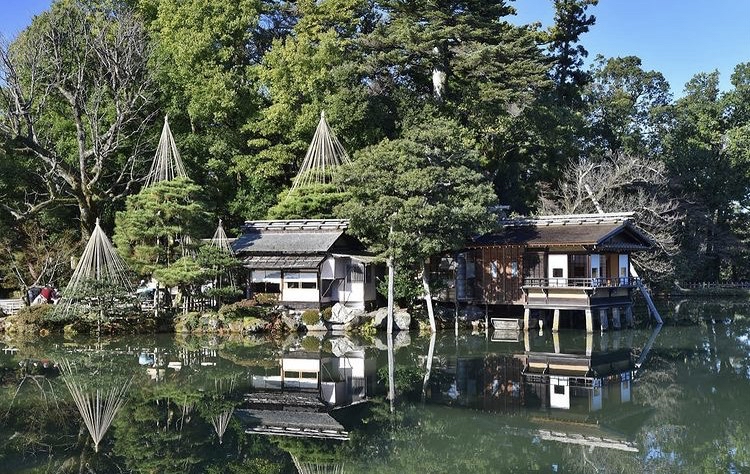 Kenrokuen Garden is one of the most popular tourist attractions in Kanazawa. It covers an area of approximately 110,000 square metres.

It is known as one of the three most famous gardens in Japan and has been designated a special place of scenic beauty by the government.

The park is made up of a series of hills, ponds and teahouses, each with its own unique atmosphere that you can enjoy whilst exploring the garden.

Kenrokuen is a place where you can really feel the Japanese concept of “Wa” (harmony), and the best part of Kenrokuen is that the gardens change depending on the season.

In spring, you can go and see the cherry blossoms which are planted all over the park.

There are about 420 cherry trees of many varieties, including Shiogama-zakura, Fugen-zo, Ugane and Somei-yoshino, and the whole park is considered a cherry blossom viewing spot.

Kenroku-en Garden is the only one out of Japan’s three most famous gardens to be selected as one of the 100 best places to view cherry blossoms in Japan.

In summer, Kenroku-en Garden is a great place to see colourful flowers such as the rabbit-ear iris, azaleas and Satsuki azaleas.

Surrounded by vibrant, fresh greenery, the garden is cool even in summer and you can enjoy the scent of young grass as you stroll around.

In autumn, you can see the autumn foliage throughout the park.

In some places, you can see the leaves reflected in the pond, and at night, the park is lit up to create a romantic atmosphere.

Yukihari “snow hanging” is a famous winter tradition in Kanazawa and is used to protect the branches of the trees from the snow.

Ropes are lowered from the tops of the trees like umbrellas, adding a distinctive touch to the winter landscape of Kenrokuen.

This garden is also lit up at night, giving you a fantastic view of the garden while you wander around. 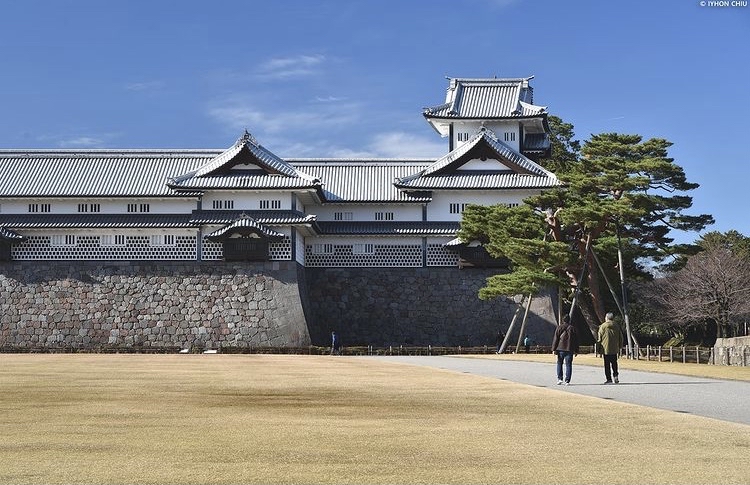 Kanazawa Castle, located in the centre of Kanazawa City, is one of the largest wooden castle buildings built after the Meiji period in Japan. The castle was originally used as the residence of the Maeda family of the Kaga domain during the Edo period.

After a series of fires destroyed most of the buildings, the castle was reconstructed in the Heisei period and opened to the public as Kanazawa Joshi Park in 1996. In 2008, the castle was designated a national historic site.

Kanazawa Castle is called the “Museum of Stone Walls” because of the historical documents and surrounding related to the stone walls. Among them, the Ishikawamon Gate, an important cultural asset, is unique in that the stonewalls are built in different ways on the left and right sides.

Kanazawa Castle is next to Kenrokuen Garden, so we recommend you visit both places. 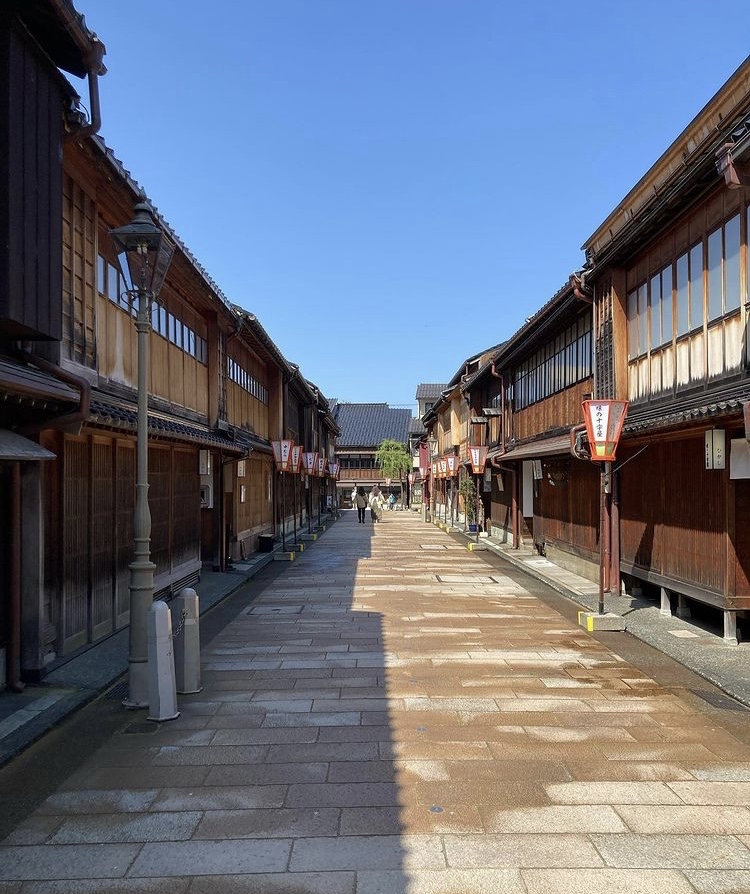 Higashi Chaya street is one of the most popular tourist attractions in Ishikawa Prefecture and is located 10 minutes from Kenrokuen Garden. This area is popular as a photo spot because of its Japanese atmosphere.

Since the Hokuriku Shinkansen began passing through, cafes and souvenir shops have been popping up one after another.

Particularly popular is the gold leaf soft-serve ice cream available at the Higashiyama branch of Hakuichi. 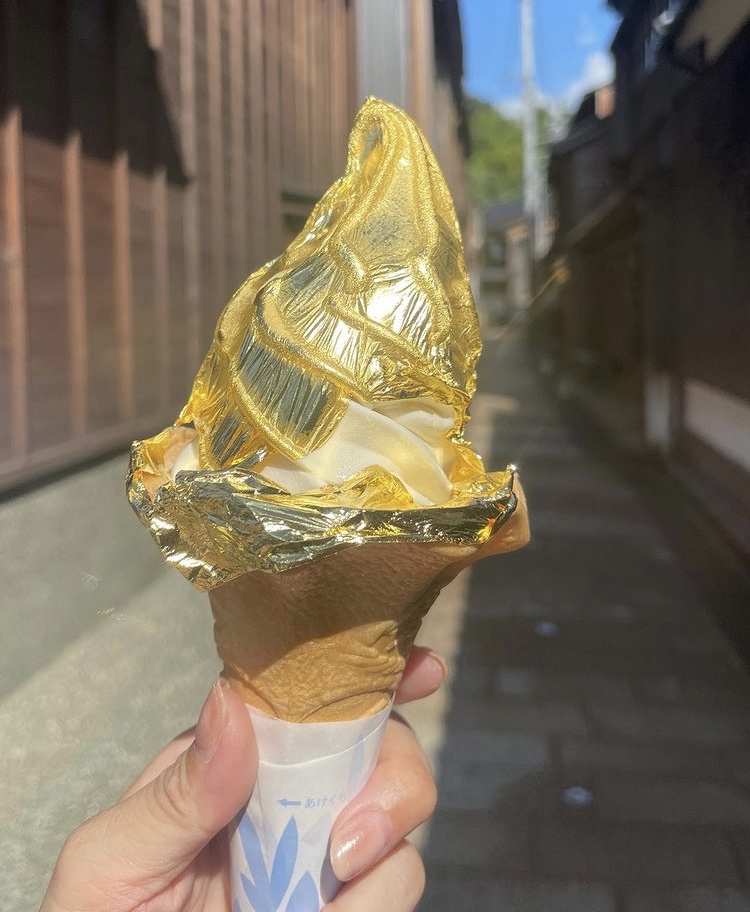 As the name suggests, this soft-serve ice cream is covered in gold leaf. As well as being visually impactful the gold leaf perfectly complements the rich milk used for the ice cream.

This soft-serve ice cream is both visually appealing and delicious. You’ll feel like you’re in the lap of luxury.

It is a must-try when you visit Higashi Chaya street.

*Please note that most of the shops along Higashi Chaya street close at 17:00. 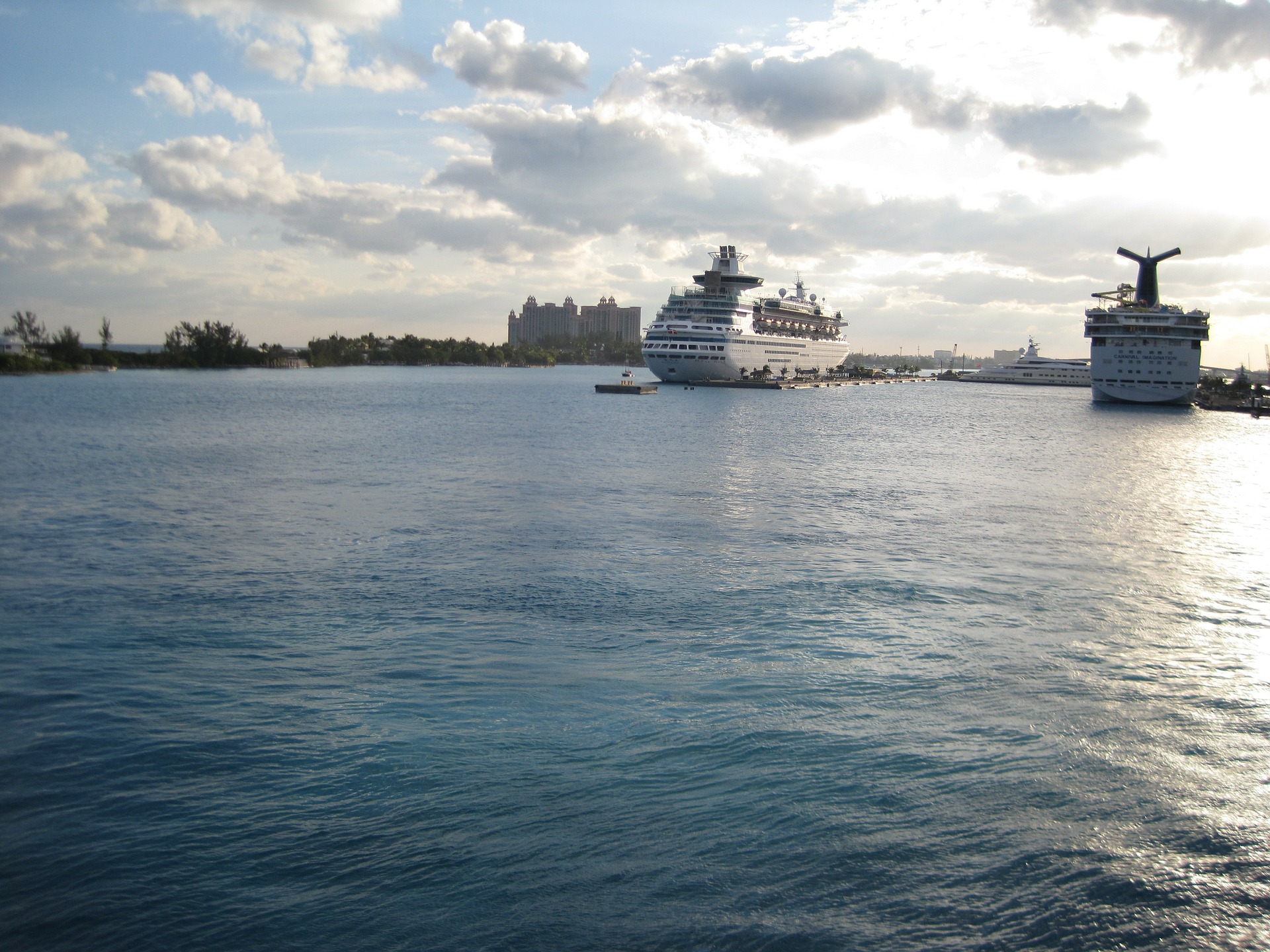 The Kanazawa Port Cruise Terminal, which opened in June 2020, was built as a “new sea gateway to the port of Kanazawa” for cruise ships visiting the city.

The waiting area on the first floor is lined with pillars of artwork that combine the theme of “the sea” with traditional crafts representing Ishikawa and Kanazawa.

On the second floor, there is an observation deck, a restaurant and an experience room.

On the observation deck, you can enjoy a panoramic view of the Sea of Japan.

There are also benches on the deck, so on sunny days you can relax and enjoy the view of the sea.

You can also see the cruise ships from a very up, so it’s a fun place to visit with the children!

The Sea Restaurant Bay Arce has been designed so that you can see the sea from every seat, and you can enjoy dishes and sweets made from a wide variety of seafood from Ishikawa Prefecture.

The “Kanazawa Port Learning Experience Room” is an area where children and adults alike can learn about the port of Kanazawa while having fun.

Particularly popular is the “Kanazawa Port Manoeuvring Simulator”. It recreates Kanazawa Port as seen from a ship, and is a great way to experience the feeling of actually controlling a ship.

What better way to experience the tension that only a big screen can bring! 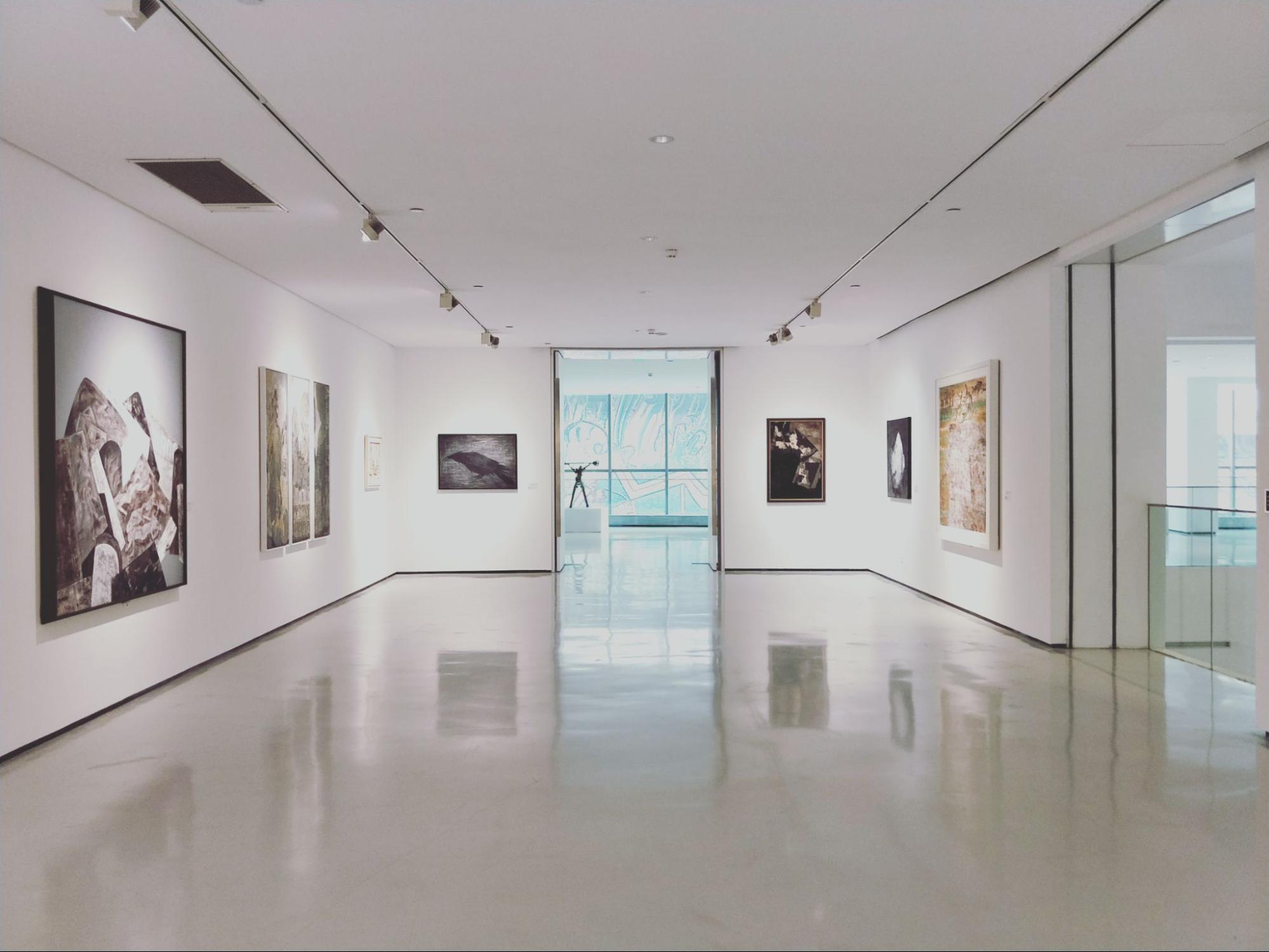 The 21st Century Museum of Contemporary Art, Kanazawa is located 10 minutes by bus from Kanazawa Station.

The museum was built under the concept, “a park-like museum open to the city”, where anyone can drop in at any time and have a variety of encounters and experiences.

The museum is divided into two zones: the exhibition zone and the social zone, where a variety of programmes are held throughout the year.

The Swimming Pool, which gives visitors a magical experience of being underwater, and the Green Bridge, a plant installation that spans the corridors of the museum, are just two of the many unique features of the museum.

In addition, the museum’s café-restaurant fusion21 offers a variety of dishes made with local ingredients, based on the idea of “a second impression of the museum”.

The Best Way to Get to Kanazawa is By Bus!

The best way to get to Kanazawa is by bus. However, as there are so many bus booking sites, it is difficult to decide which one to go for.

We recommend you use the largest express bus booking site in Japan, Japan Bus Online!

This site only deals with bus companies that have undergone strict screening by the government, so you can enjoy your trip safely and with peace of mind.

You can choose your departure point and time, among other things from a selection of 430 routes nationwide, so you can make a reservation very easily!

In this article, we introduced you to six must-see tourist attractions in Kanazawa!

What did you think?

Kanazawa is a wonderful place full of charm, with plenty of historical streets, traditional crafts, gourmet food and tourist attractions.

One of the attractions of Kanazawa is that it changes with the seasons.

Why not take your camera and enjoy a relaxing trip to Kanazawa?