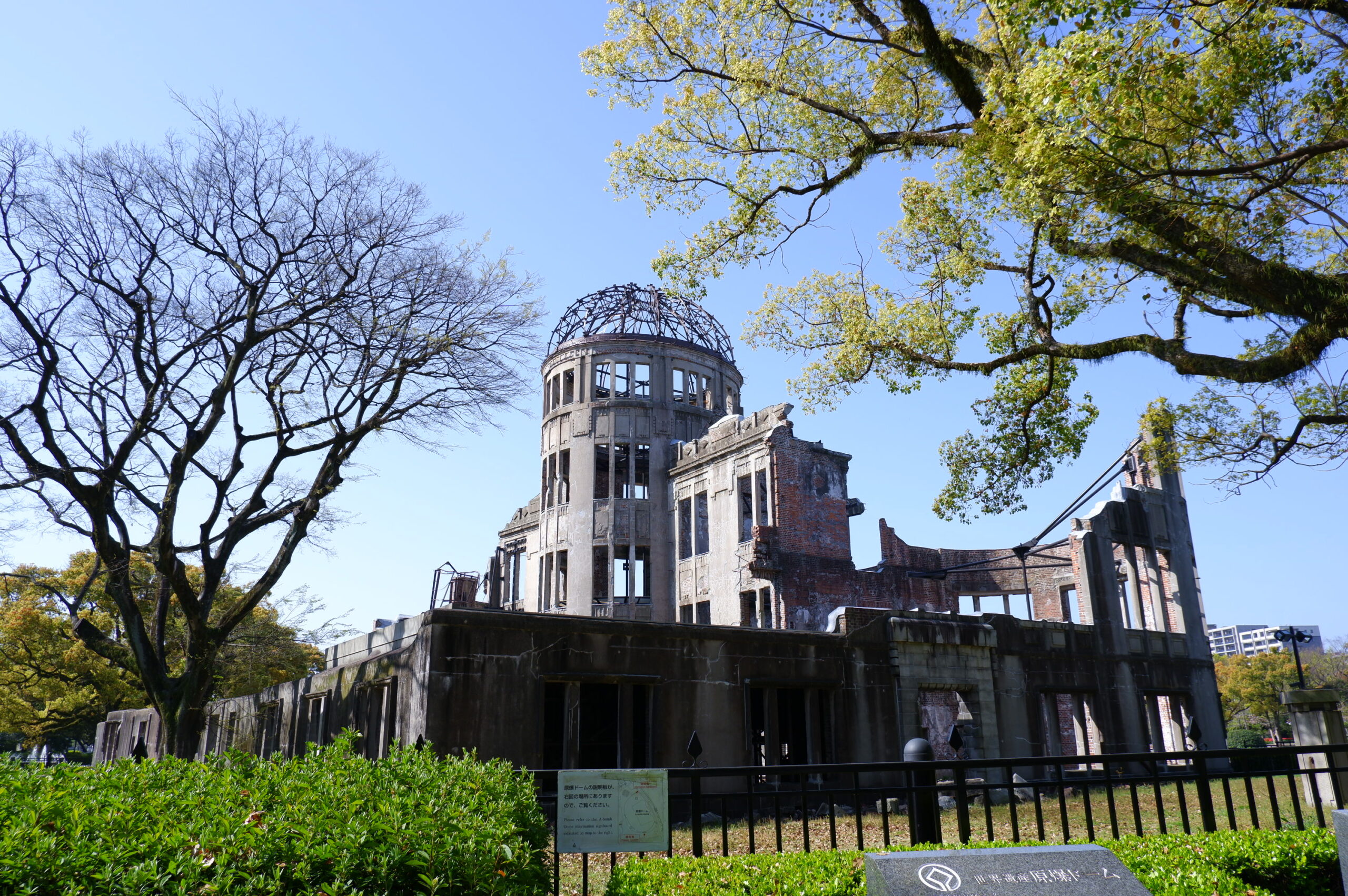 Hiroshima Prefecture is a charming spot for travel where you can enjoy world heritage sites such as the Atomic Bomb Dome and Itsukushima Shrine, as well as gourmet foods like oysters and citrus fruits. But did you know there is a sightseeing bus that tours around world heritage sites in Hiroshima?

In this article, I am going to share with you my experience of taking the Two World Cultural Heritage Sites Sightseeing Tour (with guide service and lunch included). I believe the information would help those travelling to Hiroshima for the first time, please take a look.

What is the Two World Cultural Heritage Sites Sightseeing Tour?

The Two World Cultural Heritage Sites Sightseeing Tour is a convenient sightseeing bus service which takes you to Atomic Bomb Dome and Miyajima / Itsukushima Shrine which are the must-see spots in Hiroshima.

These are the major spots that the Two World Cultural Heritage Sites Sightseeing Bus goes.

Check out more information and make a reservation at the link below.

※According to the information in Jun, 2022, the bus mainly runs on Sat, Sun and public holidays. You will be able to secure a seat if you make an advanced reservation online. Otherwise, same-day tickets can also be purchased on the bus if seats are still available.

This time, I took the Two World Cultural Heritage Sites Sightseeing bus and visited two world cultural heritage sites. I am going to share my travel experience with you in sequence, hope you will find the information useful.

8:40 Headed to the bus stop at Hiroshima Station Shinkansen Exit 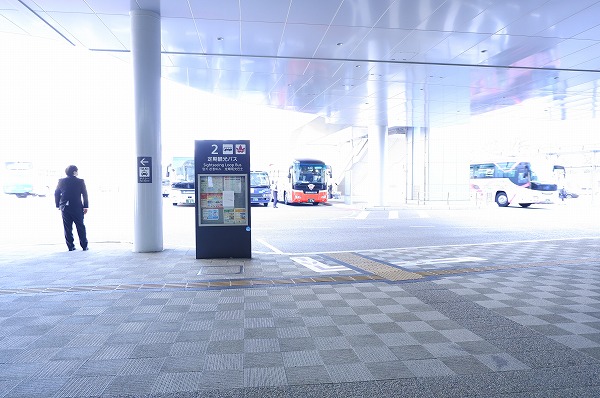 The bus stop is at the 1/F of Hiroshima Station (Shinkansen Exit), just right in front of the bus terminal. 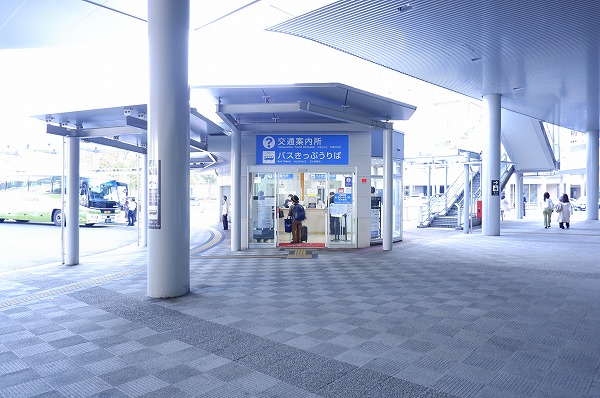 If you have made a reservation online or by phone, you can just go directly to the nearby bus ticket counters to get your tickets. 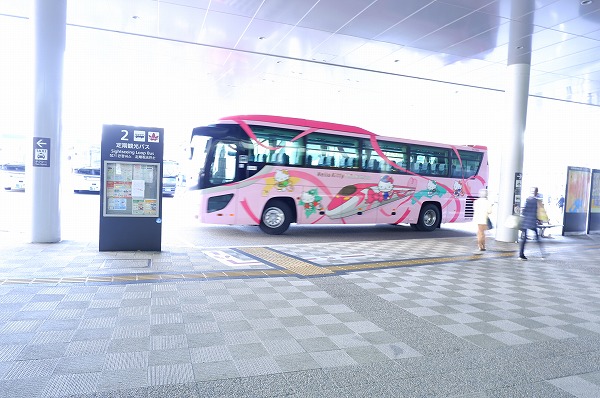 The bus arrived 10 minutes before its scheduled departure. It was a Hello Kitty bus today, which was said to be in collaboration with the Hello Kitty trains currently operated by the Sanyo Shinkansen (as of April 2022). 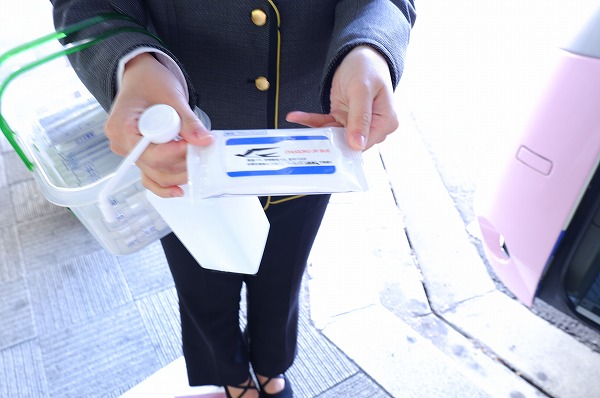 I sanitized my hands and was served with a pack of wet tissue before boarding. 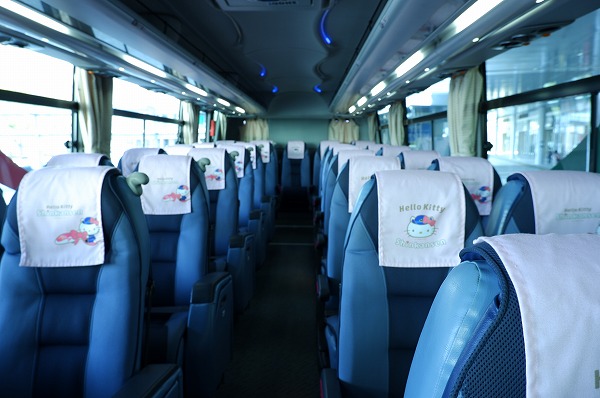 8:55 Glanced of the Hiroshima Castle from bus window 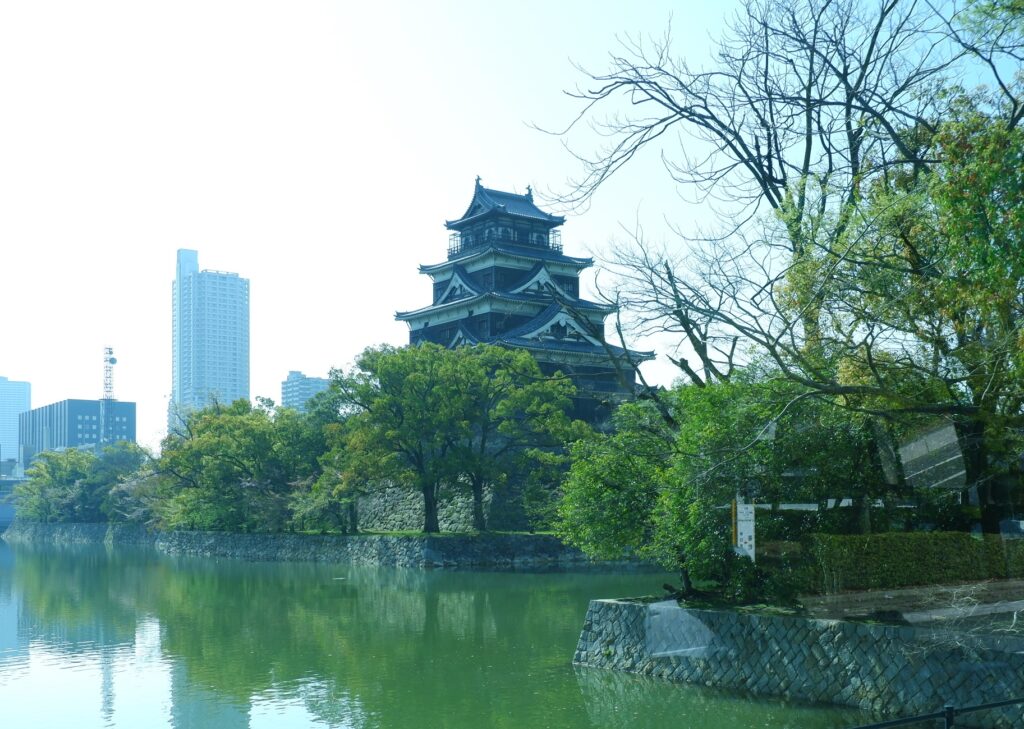 Firstly, I was able to view the impressive Hiroshima Castle from the bus window. Built in 1589 by Mori Terumoto, the castle was almost completely destroyed by the atomic blast in 1945 and was reconstructed in 1958. It is now served as a museum on the history of Hiroshima. 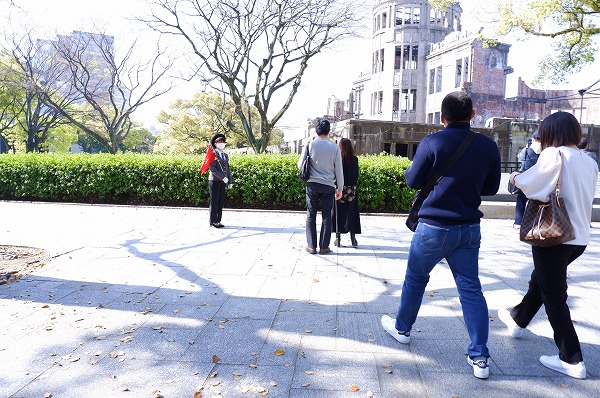 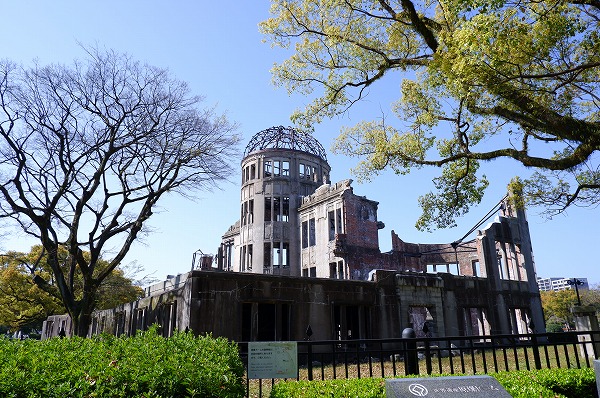 The Atomic Bomb Dome, formerly the Hiroshima Prefectural Industrial Promotion Hall, was a stylish building at that time. At 1945, the building was destroyed by the world’s first atomic bomb exploded at an altitude of about 160 meters. It was registered as a World Cultural Heritage Site as a symbol of the devastation caused by atomic bomb in the history of humankind. 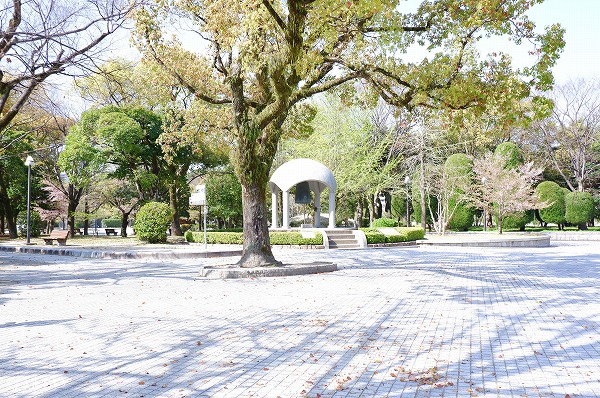 After crossing the Aioi Bridge, I walked towards the river where the Peace Memorial Park is located.

Peace Memorial Park is a park located near the hypocenter. Currently, it is a tranquil green space but it was once the city’s busiest district before the explosion. 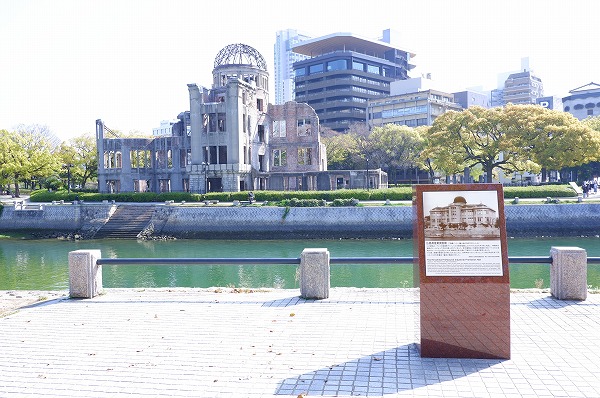 It was the Atomic Bomb Dome seen from the Park. You can compare and see how extensive the damage was with a photo showing the original appearance of the building. The tour guide also gave us a detailed explanation on the place where the atomic bomb exploded.

I learned about the atomic explosion in my history class and heard about its tragedy. But I couldn’t imagine how terrible it was knowing that the bomb exploded at 600m above the ground, which was nearly the height of Tokyo Skytree. It was a precious place that I could understand more clearly what cruelty has happened due to mankind, though I was from a generation who have never experienced a war.

9:35 Resolved for peace at the Hiroshima Peace Memorial Museum The Hiroshima Peace Memorial Museum is located in the premises of the Park. Through exhibition of photos and materials, belongings left by victims, testimonies of survivors, the Museum conveys to the world the devastation that the a-bomb caused. The history of Hiroshima dealing with a-bomb exposure was also presented in picture panels. A special exhibition on nuclear weapons was held until today.

Through the exhibition, it reminded us a peaceful world cannot be taken for granted and it is important that everyone in the world should work together to maintain peace. A boxed lunch was served after returning to the bus. It was a local soul food called “Musubi no Musashi” which was said to be the most popular lunch box among the locals. It looked compact, but it contained a good portion of various kinds of food. Since it was a lunch box, it was up to me to enjoy my lunch at any moment, whether in the bus, or in the ferry later on, or in Miyajima. As I was getting hungry, I took my lunch just right after it was served. It was also a good idea to have your lunch in the ferry feeling the sea breeze if you are not getting any seasick. 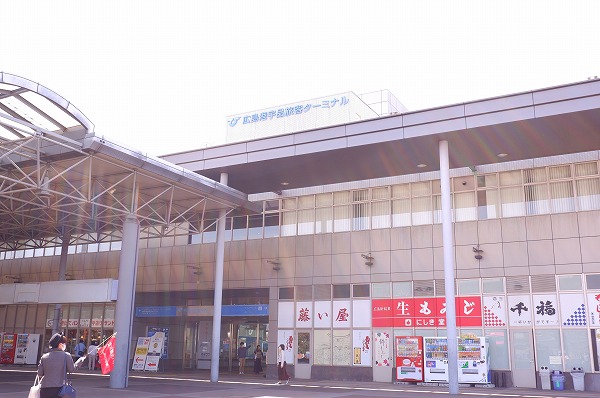 In the sightseeing bus tour, a high-speed boat ride between Hiroshima and Miyajima was scheduled. We were now heading towards Miyajima. 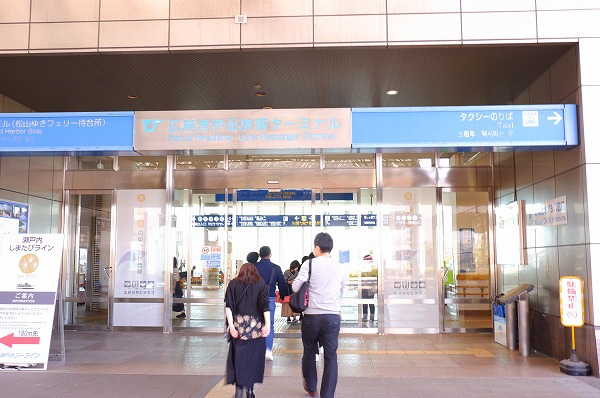 We waited for a while and headed to platform No. 6. 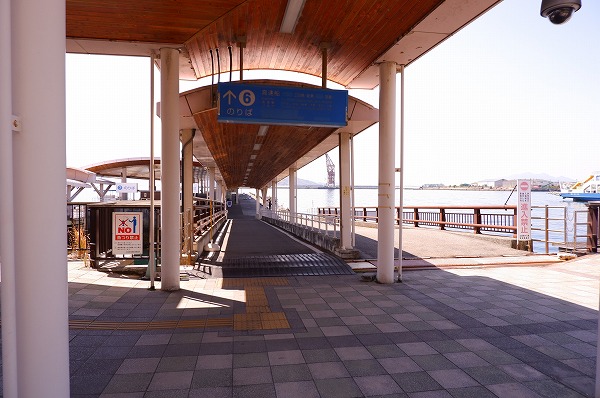 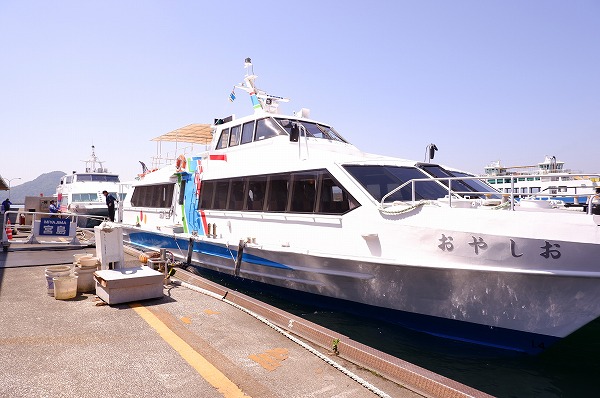 The high speed boat was here! 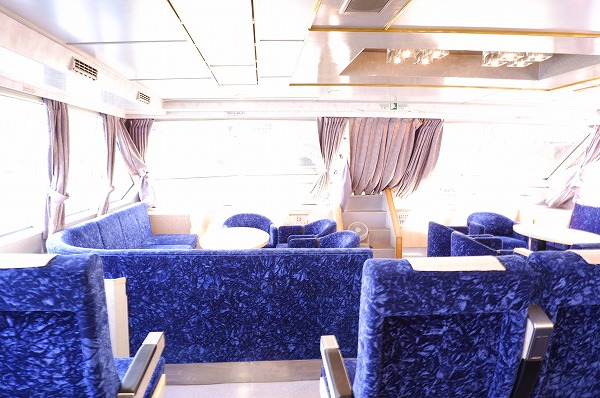 It seemed to be relaxing to spend your time in the cabin. But the weather was nice today, I decided to go to the upper deck. 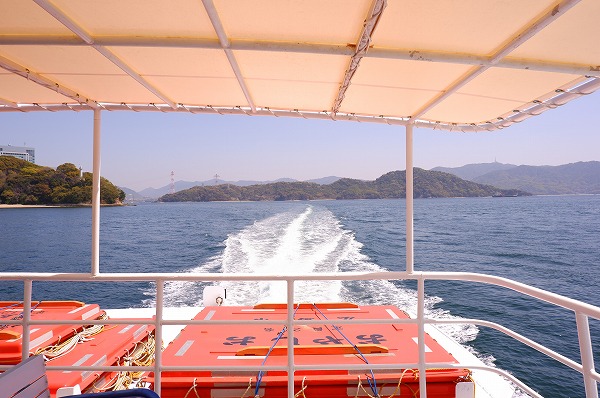 It was a calm cruise on the Seto Inland Sea with not much motion. I had a pleasant time on the boat. We arrived at Miyajima after 30mins.

The first part of the article was a trip around the city of Hiroshima, focusing on the A-Bomb Dome and Peace Memorial Park. In the second part, I am going to share with you my leisurely stroll in Miyajima, which is home to another world heritage site, Itsukushima Shrine. Please stay in tune.

Click the links below to get more information on the Two World Cultural Heritage Sites Sightseeing Tour and its reservation.

If you want to make a reservation for an expressway bus,
Please go to “Japan Bus Online”.
The information in this article is current at the time of writing.
It may differ from the latest information.